Nina: Nana, Nana! I just found something totally up your alley!

Stop singing that silly song, Nina or I will spank you.

Which one? The bootmakers alley?

Nina: You are as terrible at making jokes as you are at understanding them! My English teacher recommended the Perry Mason mysteries to read during the vacation. As they were written during the early part of twentieth century, I thought you would have read them.

Nana: I know brick masons, freemasons and even a stone mason but what’s a Perry Mason?

Nina: Oh, you are hopeless. Don’t you know that the Perry Mason series was considered the best detective whodunits of the last century? The hero of the series, Perry Mason was a criminal lawyer much similar to the author of the series, Erle Stanley Gardner who was a successful lawyer himself. There were also television and movie adaptations of the books. Actor Raymond Burr was famous for his interpretation of Perry Mason as a lead character of a TV series!

Nana: That explains it. Why would anyone torture themselves into reading such things for fun is beyond me!

Nina: But it’s so fascinating to read about how people lived in a world without mobile phones, internet or even a Game of Thrones series on the TV! Perry Mason is featured as a razor sharp, street smart lawyer who often applies real world logic for solving his cases.

Nana: But logic is often rare in the real world.

Nina: I find his secretary Della Street and detective Paul Drake, pretty interesting characters too. You can borrow the book I am reading now, Nana which is called the The case of the Velvet claws after I am done.

Nana: Are they that good? It’s hard to imagine you accepting something without being a wet blanket.

Nina: Well, if you want to know, I find that one of the major weaknesses of the books are how unbelievable it is that all of Perry Mason’s clients are innocent or that the lawyer wins all his trials except one.  There is also the fact that how anyone as silly as Hamilton Burger is, could hold such an important job for such a long time while losing all his cases is beyond me! Apparently job appraisals didn’t exist in that era. Of course, the author explains that away by casually mentioning how Hamilton Burger wins when running cases against other lawyers. Still, as whodunits go, this series sets your blood racing.

Nana: Heavens forbid! My blood runs enough races with your non-stop chattering. Don’t need those books to do them for me. 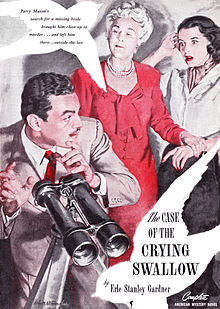 This post is a part of the #NinaAndNana series I co-host with Kanika G. Her posts can be found here.