Le Grande K. Sounds like a Hollywood movie based out of Dicksonian characters, doesn’t it? However, it isn’t anything close to a Hollywood movie. The Le Grand K is a cylinder weighing exactly 1 kilogram made of a platinum iridium alloy kept under environmentally safe conditions originally created in the 1800’s and used as a model metric in international trade and commerce.

However, the invention of atomic clock revolutionized the concept of measurements and keeping time. Several nations recently voted to overthrow Le Grand K and to redefine the kilogram and three other standard units of measure: the ampere, for electrical current; the kelvin, for temperature; and the mole, which describes the amount of a chemical substance. Henceforth the meeting decided that the Le Grande K would only be defined by abstract constants of nature. This New York Times article explains why a physical object as a standard unit of measure would be inconstant. A physical object could be scratched, chipped or even destroyed. The new definitions for the kilogram, ampere, kelvin and mole will take effect next year and will impact only scientific measurements but not regular people like you and me.

Nina & Nana are here today as usual to talk about this recent changes in the history of measurements. This article was shared by one of our readers Shreedeep Khandalkar. Thanks Shreedeep. 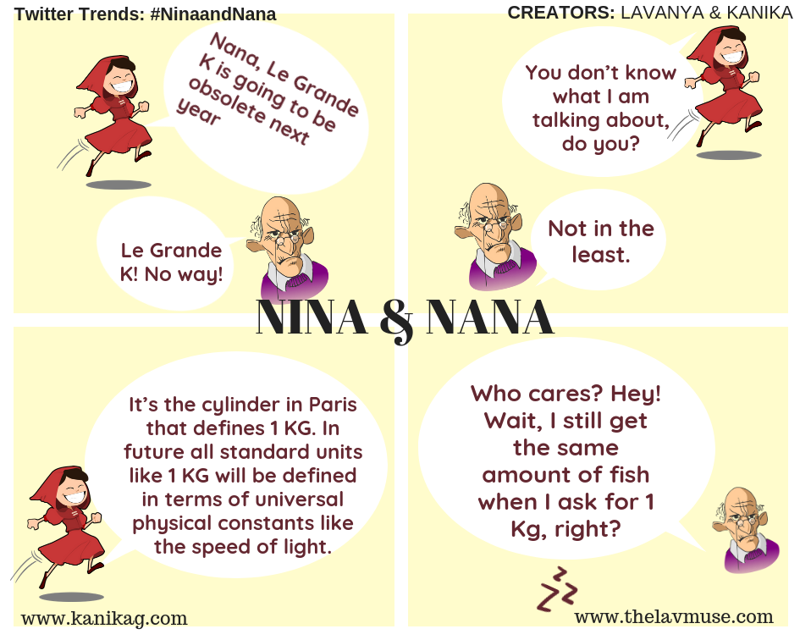